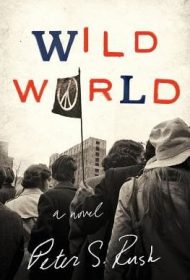 Peter S. Rush’s novel Wild World, set in the early 1970s, centers on an idealistic antiwar activist who chooses an unusual path for himself.

Steve Logan makes a peculiar career choice after graduating from elite Brown University. His head stuffed with world-saving ideas from a New York cop and a dreamy Brown professor, he forgoes law school at Georgetown to become a Providence, R.I. police officer and singlehandedly clean up the mess in one of the country’s most corrupt cities.

Quickly, this baby Serpico faces dangerous antagonism from his bribe-taking, prisoner-bashing, blue-collar fellow officers and resentment from his old anti-Vietnam war comrades back on campus—even his pseudo-Marxist girlfriend, Roxy Fisher. He’s stranded on the fringes of two worlds.

As the story evolves our hero manages to uncover a filthy conspiracy involving local politicians, the police department, Providence’s mob family and his old alma mater.

This is a fast-paced story with compelling soft-boiled prose: “He loaded . . . putting the four jacketed bullets in first and the hollow point last. If he needed a fifth shot, it was going to end any conversation.” The author also shares some key history with his hero—Brown grad, ex-Providence cop—that points at elements of autobiography and authenticity.

Unfortunately, the protagonist’s idealism is tainted by a bothersome streak of self-righteousness, which compromises what is otherwise a vivid portrait of a time and its many ferments. While Rush checks all the right political and cultural boxes—Charles Manson and Joni Mitchell; “Love it or Leave it” banging heads with “Hell no, we won’t go”—Steve is busy lecturing cops, demonstrators and Rush’s readers alike. Early in the story, he grandly imagines himself as a “disinfectant for the department.”

Wild World would be improved with a less sanctimonious protagonist at its center. Still this is a well-written novel—one rich in period detail and dramatically dynamic.