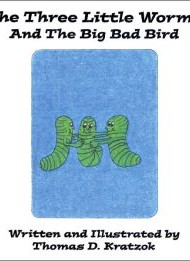 Thomas D. Kratzok, author and illustrator of six earlier picture books, reworks the classic story of The Three Little Pigs into his own tale featuring, as the title declares, The Three Little Worms and the Big Bad Bird. His story employs similar elements to the pigs’ interaction with the Big, Bad Wolf, including three worms choosing homes of various suitability for protection, repetition of the general plotline as each finds a home, and scary threats from the predator.

Kratzok uses bright, child-like, crayoned pictures to illustrate his frightening story, in which the bird threatens: “Little Worm, Little Worm, its [sic] no use to hide. So come out now and I’ll be quick to suck you inside”. [sic] As one bird flees his apple home to hide in his fellow worm’s corn cob, the bird goes on to warn: “There’s no place to hide so give up, or I’ll peck you to pieces.” Even when the worms are secured in a strong log home, the bird tells the trio, “…beware! I will wait right here however long it takes. For when you do come out, I’ll have Little Worm Steaks.”

Kratzok’s Big Bad Bird’s words go beyond the kind of threats the wolf makes in the pig story. While the wolf warns that he will “blow your house down,” he does not issue grim predictions of what he’ll do to the pigs themselves. Kratzok’s “I’ll peck you to pieces” seems unnecessarily terrifying, when he could have had his bird focus on the dwelling instead of the worms’ bodily vulnerability. Fortunately, the ending is clever and offers a useful moral that cooperation is key to survival in a threatening world.

Ultimately, the story suffers from its flaws. Misplaced and absent punctuation and the failure to break dialogue from narration spotlight the need for better editing in a book that seems unduly unsettling for small children.