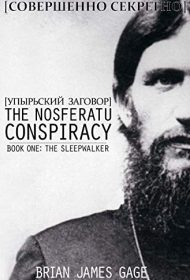 The first installment of Brian James Gage’s Nosferatu Conspiracy saga is a deliciously dark blend of occult fantasy, alternate history, and apocalyptic fiction that will have readers furiously turning pages until the end.

Set largely in 1916 Saint Petersburg during the reign of Nicholas II, the last tsar of Russia, the main storyline revolves around Grigori Rasputin, an alleged holy man who is attempting to manipulate members of the royal family to bring forth an impending prophecy. The prophecy is known as the “Nosferatu apocalypse,” when the coming of the Bloodchild will herald a new golden age where vampires rule the world. Rasputin, a powerful vampire who has survived numerous murder attempts, must coerce Nicholas’ sickly son Alexei—the prophesized Bloodchild “born half-dark, half-light”—to commit heinous acts to trigger this new world order.

The people of Saint Petersburg’s last hopes remain with a small group of heroes who must maneuver through a looming revolution, the tsar’s secret police (Okhrana), a cult of high-ranking officials whose ultimate goal remains obscured, and—of course—armies of virtually indestructible vampires bent on wiping out (i.e., consuming) any resistance.

The problem with the vast majority of vampire thrillers is in their derivative, clichéd narrative—put a stake in it already! But Gage breathes new life into an old mythos through an innovative reimagining of the vampiric legend and the utilization of powerful imagery throughout (“The building seemed to hulk over him like a gothic monster waiting to pounce…” ).

Additionally, the novel is not only powered by an action-packed storyline, relentless pacing, and well-developed characters, but also a diversity of intriguing elements that make for a darkly stylish read: Armies of giant bats, witches, badass vampire hunters, blood cults, and gruesome, graphic descriptions are just the beginning.

Simply put, this is an irresistible read. Dark fantasy and historical thriller fans alike will devour this novel.