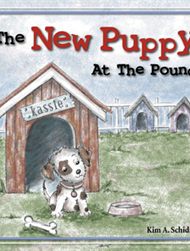 Kassie is a sweet-tempered addition to a legion of puppy stars vying for the hearts of preschoolers, joining Biscuit, Clifford, Spot and others as a trustworthy, cheerful surrogate for their fears, hopes and wishes.

With her pink dog collar and delightful brown-and-white spotted fur, Kassie seems smart and cuddly. She tells readers about how she wandered off one day and lost her parents, arriving alone at the dog pound. Being new there, she finds that many of the other puppies already have friends and worries about fitting in. One group of golden puppies even makes fun of her by calling her “Spotty.” Kassie doesn’t give up and soon has new friends. Then on one special day, she learns her friend Susie and her family want to adopt her!

Kassie speaks directly to readers, inviting Dora-the-Explorer-esq interactivity. She informs her young audience she will be their “special puppy pal” and admits to times when she felt lonely or rejected. In this way, she reassures readers that she understands their feelings and tells them that if they ever feel the same, “Just rrruuuuffff and I’ll be there for you.”

Though engaging, Kim A. Schidrich’s story suffers from several flaws. Because preschoolers are asked to identify so closely with Kassie, one can’t help worrying that they will be upset by the loss of her family early on. Can all parents be replaced as easily as Kassie’s? Also, closer attention to detail is called for. In the illustrations, for example, Kassie’s brown eye patch – in itself a lovely detail Â¬– keeps changing sides: on the cover it’s on the left side of her face; on inside spreads it switches back and forth. Minor copyediting errors also distract.

Overall, while The New Puppy shows a nice understanding of its young audience, further polishing would make it a more appealing choice for parents looking for reading options for their children.