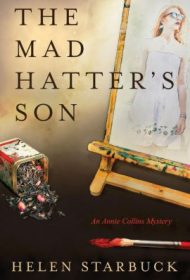 A good mystery is a lot like poker; the element of suspense is crucial. With The Mad Hatter’s Son, Helen Starbuck deals readers a compelling story, even if she shows her hand a bit too soon.

The novel focuses on narrator Annie Collins, a Denver OR nurse whose self-deprecating tone provides humor and endears her to readers. As the story begins, Annie is contacted by Libby, her college roommate, who is ill with an undiagnosed and inexplicable condition. The two friends lost touch years ago when Libby married, a union that hasn’t turned out well.

Annie is unable to determine the source of Libby’s problem, but while caring for her friend, she learns of Libby’s two affairs and a mysterious friend Libby refuses to name. She also finds Libby’s husband to be cold and aloof.

Meanwhile, Annie faces her own romance issues. It’s clear to all but Annie that her neighbor, Angel, has affection for her. And she develops an instant rapport with a man she meets named Ian, leading to romance. (The circumstances of the initial meeting with Ian feel unconvincing and contrived, one of the book’s few problems.)

Soon, two murders, the mystery friend, and Libby’s husband arouse Annie’s suspicions, and the narrative follows her determination to understand her fast-evolving relationship with Ian and  unravel the reasons for the deaths.

Annie makes for a fun protagonist, although readers may find her occasionally frustrating, as there are many instances where she should heed the advice of others, but doesn’t. And while the perpetrator is easy to spot early on (the character behaves oddly, in ways that are often exaggerated or too-handily dismissed), the novel has many rewards: The characters are genuine, as are Starbuck’s descriptions of the Mile High City and its environs. The mystery is creative, nicely paced and features well-developed characters.

Despite the ease of determining the criminal at its center, readers will find this an engaging, rewarding novel.

AUTHOR PLATFORM: Winner of the National Indie Excellence Award for the mystery category.