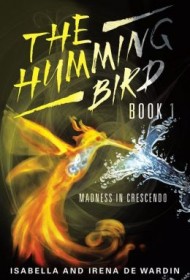 If Jane Eyre went through the looking-glass rather than Alice, her adventures might have led to a place very like Voskia, the topsy-turvy world where the de Wardin sisters send Maria Langlord in The Humming Bird, Book 1: Madness in Crescendo. Here, we get the social commentary of Bronte along with political analysis through humor a la Lewis Carroll, steeped in a romantic world of virtuoso violinists and beautiful ballerinas.

It’s a lot to tackle, especially in a first book, but Isabella and Irena de Wardin rise to the challenge with the extremely entertaining story of the privileged young Maria’s forays into the “Unsettled” areas of Voskia. Gypsies of all sorts roam the streets; The Mad Hatter has nothing on the street ventriloquist who speaks through her boots, for instance. Here, Maria can indulge her love of dance, an unseemly avocation her parents would forbid if they knew. Indeed, her father seems to be intimately involved in the effort to elect a new president with decidedly anti-gypsy sentiments. Balancing these worlds would be hard enough for Maria without the seductive powers of the impish Yakov, who is surely stealing her heart with his seductive violin music.

Maria’s adventures are many, and they unfold one on top of the next. Rather than grow to the crescendo promised in the subtitle, however, the story loses some steam as each clandestine trip turns chaotic before Maria returns home for a short interlude and then heads out again.

What holds it together, however, is the building attraction between Maria and Yakov, who can’t be together, but can’t stay apart. The dance scenes recall every romantic musical you’ve ever seen, as the two circle each other amidst the music, eyes locked. It would be cloying if it weren’t recounted with a marvelous, tongue-in-cheek formality that affectionately mocks the very themes it portrays.

Light and entertaining, although containing serious themes, The Humming Bird is overall a delightful mix of comedy, romance, and adventure.