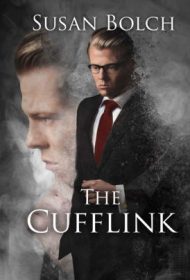 Susan Bolch’s The Cufflink is the tale of a man’s first marriage and the shameful secret from it that will inform his life.

Frederick Green is the youngest of three children raised in a Philadelphia working-class family in the years leading up to WWII. His older siblings, Will and Lorraine, are both accomplished musicians, with Will earning a place with the Philadelphia Symphony Orchestra.

But tragedy strikes when Will dies from tuberculosis, leaving Lorraine “rudderless” and soon in an abusive marriage that also leads to an early death. Fred wins a scholarship to Temple University and follows this with law school, where he befriends a well-heeled classmate who helps gain him entry to the world of high society, and in turn the introduction to Deborah Klein, whose father’s business dealings are shady at best.

Fred and Deborah marry and have a daughter, but when the senior Klein is caught in a scheme to illegally sell rationed tires, Fred is framed in the cover-up, irrevocably changing his life. A second marriage and another daughter follow, but Fred keeps his early life a secret, lying at times to ensure it remains so. When discovered, his deceit casts a shadow on everything his daughter thinks she knows of him.

This is a carefully constructed novel dedicated to the author’s father, whose life it chronicles. Bolch is a capable writer, skilled at description, such as this passage about Fred’s father: “Walter was a handsome man with … steely-blue eyes that expressed a mien of perpetual gravity… a man for whom levity was an effort, but he was not unkind.” While the attention to detail can slow the pace, it also creates a believable story of complex lives, sympathetic characters and the impact of family secrets, both to the keeper and to those the secret may be revealed.

This novel will appeal to patient readers who enjoy a story about family relationships and the imperfections in each of us.