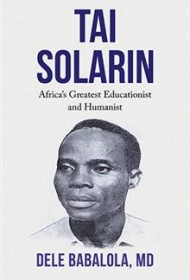 Sometimes a person is associated so strongly with a place that a biography of one becomes a tale about the other. Tai Solarin is one such biography; details of Solarin’s life are included, but this is really a story of the Mayflower School he founded in Nigeria.

Solarin was born into poverty, but his mother insisted he get an education, moving him in with various relatives to ensure he would eventually be able to support himself and his twin sister. He traveled to England in hopes of becoming a pilot during WWII but failed the test and ended up in college, where he found his calling as an educator along with the woman he would marry and work alongside in his home country. The Mayflower School he founded combined hard work—students had grueling jobs and many responsibilities—with rigorous study and an emphasis on humility; if a female student’s uniform varied from that of her peers, it was quickly replaced and the offending material converted into dishrags.

Babalola was a student at the Mayflower School, and he writes vividly about his childhood desire to go someplace posh rather than this “bush” school his father was set on. Once accepted, however, he grew to appreciate the tin-roofed dormitories and hard labor that built character and values, along with the rigorous academics.

Babalola can tell a good story, but this short book is highly disorganized and full of repetitive passages. There are six preliminary introductions before the story begins and an over-reliance on five-dollar words when simpler language would suffice: “[H]e chose to live like a plebeian so as to conserve the funds to educate the indigent but highly cerebral children.” Even the title includes an invented word.

Tai Solarin introduces readers to a man who sacrificed much for the betterment of his country. While the spirit of the story is powerful, the book needs major content and organizational edits to reach a wide audience.