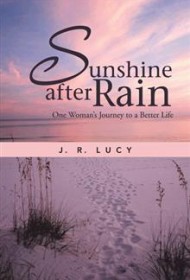 Sunshine After Rain is an engaging memoir that should hold special appeal for anyone whose life has changed significantly in later middle age. While it tells of “one woman’s journey,” it has clear universal appeal.

Author J. R. Lucy grew up with a mother who was verbally and physically abusive and a father who didn’t intervene to protect her. She married young to escape this situation but ended up living with her husband’s family and an equally hostile mother-in-law. When a second marriage ends in divorce, she moves in with her mother again, which ends disastrously, then finds a new apartment and a friend to share it with (along with a smuggled-in cat). By story’s end, things seem to be on track in her life.

Sunshine benefits from Lucy’s wry storytelling voice. After her second marriage dissolves, for example, she comments, “I was more upset about having to leave my pets behind than leaving my husband.” Stories from an Italian vacation ramble on a bit, but are nonetheless fun. Lucy’s mother evicts her from an apartment she’s living in, and it ultimately liberates her from any further responsibility to her lifelong tormentor. Anyone who has lived in the shadow of abuse will savor her victory, and may also find a way out for themselves (right down to starting an escape fund, if it’s called for).

Lucy is upfront about her own flaws, including excessive drinking, but she appears to be a woman continually taking the reins and steering her life where she wants it to go — and why shouldn’t she? In the book’s last line, she notes, “I am too old for rules.” Sunshine After Rain is an uplifting and entertaining memoir.