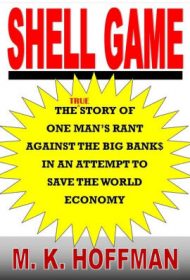 The 2008 recession was the greatest economic crisis since the 1930s. In Shell Game, M.K. Hoffman asserts that neither banks and investors nor Freddie and Fannie were to blame. It was something apparently unrelated to mortgages: oil prices.

The rise in oil prices following 2005’s Hurricane Katrina, Hoffman writes, proved that consumers would pay much more than the average price for gas. Hoffman alleges this led Morgan Stanley and others to plot to inflate the price of oil by manipulating the supply. When spiraling fuel costs added $1,500 on average to families’ monthly budgets—and more for average businesses—the results were lost jobs, business failures, poorly supported mortgages in default, and a long recession.

Believing that manipulating oil prices constituted a crime, Hoffman began a quest to alert the proper authorities. He called senators, trade commissions, the New York state attorney general and the FBI but ran into indifference, stonewalling or, he alleges, outright corruption. Ultimately,  little was done in the face of what, if Hoffman’s right, was the crime of the century: torpedoing the world economy.

Hoffman, an able and entertaining storyteller, turns a subject that could be deadly dull—the economics of oil—into a page-turner, using humor and irony to good effect. Readers can hear the New York accent behind the anecdotes, so vivid is the author’s voice. Hoffman describes his work as “a rant” but it explains complicated matters in plain English. One caution: Some readers will find the author’s remarks about women (e.g., referring to a Ph.D. economist as “an attractive little blonde”) off-putting.

This book says something important about how our system is rigged and how big money speaks the loudest. Hoffman makes logical, persuasive arguments, while reveling in the “outsider” role. Readers will make their own judgments of what to believe.

A breezy read full of biographical detail, Hoffman’s work is recommended for anyone following the ups and downs of the business climate.