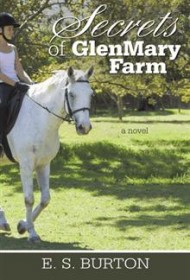 Secrets of GlenMary Farm is an apt title for this complex, layered novel, for around every turn, there is a puzzle.

As the story begins, Janice Harmon has decided that it’s time for a change in her life and moves to GlenMary Farm, a breathtaking estate in Kentucky that serves as a home for both aging seniors and children with emotional issues. As Janice gets to know her fellow residents, she befriends young Emily Carpenter, the daughter of the resident psychiatrist. Emily is bright and a capable budding horsewoman, and she takes to Janice instantly. But all is not as peaceful as it seems at GlenMary Farm. The aging house holds secrets of its own, and the estate has a tragic history that someone wants to keep hidden at all costs.

Janice doesn’t know whom she can trust; at times, it seems that little Emily is her only confidante. She is a capable sleuth, and as she digs into the house’s secrets, readers will be intrigued by what is under the surface.

The novel takes place in two different time periods, 1954 and 1968, and though the sense of place is exquisitely established and beautifully described, the time period is not as skillfully rendered. It’s easy to forget that this novel is set in the past, as it uses modern adjectives and expressions such as, “And then her voice suddenly became businesslike as she gave out some mumbo jumbo about math.”

While the overarching plot is gripping, the novel is overly long, and the narrative often becomes bogged down in the details. And although the characters are well-developed, there is little to distinguish Janice’s voice from Emily’s, which is puzzling because there are so many years separating the two.

Overall, though, Secrets of Glenmary Farm has an appealing plot and atmosphere. Mystery fans are likely to overlook its flaws and enjoy this novel.