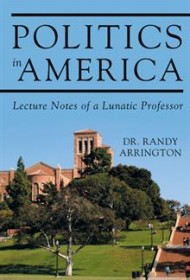 This series of political essays presents the theory that the aim of Barrack Obama’s presidency is to establish a totalitarian state. Along the way, Dr. Randy Arrington holds forth on a range of popular topics among conservatives, such as “Cultural Marxism,” “political correctness” and strategies in the War on Terror.

Arrington sees the beginnings of this totalitarian revolution as early as Woodrow Wilson’s presidency and all but foments rebellion against the elected government of the U.S. on the grounds of alleged tyranny. He holds that the president is, somehow, both a Marxist and a Muslim. But since Marxism entails strict materialism, while Islam worships a transcendent, creator God, it’s unclear how the president could hold these opposing views. The contradiction as to whether the president wishes to establish a Muslim state or a Communist state also remains unresolved.

Although the author occasionally quotes sources, the book lacks appropriate citations; there are no footnotes and no bibliography. Throughout much of the book, generalizations are made without substantiation. For example, Arrington writes, “Illegal aliens are treated like…royalty, while law-abiding American citizens are…thrown in jail without probable cause.” Without specific instances or statistics to show a pattern of evidence, the argument carries little weight.

The author also resorts to insults as he makes his arguments. For example, he repeatedly refers to the millions of people who voted for Obama as “losers” and “parasites.” Elsewhere the reader is told that, “Muslims are…brainwashed knuckleheads.” Presumably, this includes Muslim scientists, surgeons and U.S. military members. Such denigration detracts from any rational argument the author might attempt.

In the end, this is merely a catalog of poorly substantiated opinions from a Far Right perspective. Those who already agree with the author might find an outlet for their political frustrations in these pages, but the book makes no appreciable contribution to today’s legitimate political discourse.