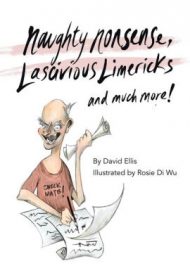 Former English teacher, chess champion and writer David Ellis has taken his lifetime collection of limericks, done a little updating, added a few new ones, and assembled them into this brief compilation.

True to the history of the art form, his limericks are often bawdy and politically incorrect. They cover a variety of topics — alcohol, vices, food, music, politicians and so forth — in a lighthearted, whimsical manner.

Under the heading of “Sexy Shorts,” he writes: “A gin-sodden old woman called Suzie/ Was known as the neighborhood floozy./ She said, “Any bloke/ Can give me a poke./ At my age one cannot be choosy.”

He gives food its own chapter, which includes: “A connoisseur of cheeses was Claud./ In his home he amassed a great hoard./ Their delights he’d expound/ When friends came around,/ Which left them a teeny cheese bored.”

Another chapter is comprised of what he defines as oddities: “A formidable figure is Mary/ Who lugs the milk churns [sic] at the dairy./ She’s tall, strapping and broad,/ She’s fiercely square-jawed/ And her arms are muscled and hairy.”

Ellis came to Australia from Britain in 1972, and some of the limericks have obscure references to Australian cities or people. The author uses helpful footnotes to explain any unusual elements. Naughty Nonsense also benefits from illustrations by Austin-based Rosie Di Wu.

Traditional limericks comprise approximately half the book, while the other half includes essays and longer verse, mostly on chess, with some relating to his childhood. The last chapter is his childhood take on English rebel Guy Fawkes.

Ellis brings a winking humor to his work, but the focus on chess in the latter half makes for a rather odd offering. It’s unclear who his target audience would be. Separate books, one for chess players and another for limerick lovers, would have been more marketable.

Nonetheless, this is a cheery book that will prompt an occasional smile and maybe even a chuckle.