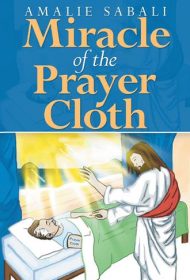 In this memoir about love, loyalty and faith, Amalie Sabali recounts her husband’s miraculous recovery from a gunshot wound and encourages others to believe that “with God, all things are possible.”

Amalie Sabali, a Trinidad native, moved to the U.S. Virgin Islands and fell in love with a man of French descent. Although she was Muslim, “Malie” embraced Catholicism to marry John and raise their two daughters. Life was wonderful until John was shot through the abdomen by a robber.

Sabali details the years of pain that ensued as John endured multiple surgeries, complications and eventually a coma. Malie stayed by his side praying, fasting and believing God would take care of them. When a friend brought her a prayer cloth and told her to keep it on John, Malie obeyed, and within three days her husband opened his eyes; weeks later he was walking!

Sabali’s theme of forgiveness and commitment is refreshing. With every reason to be bitter, especially toward the man who shot her husband, Sabali chose a different path, stating, “We never really comprehend why these horrendous things happen to us…[but] Those experiences made me a stronger and better human being.”

The text has some problems, however. Although the flow of main events is clear, the chronology tends to jump around, and Sabali’s fictitious names of famous people and places is distracting. She never explains why she created names like “News Ark” (New York?) “Spring Break Hideaway” (Daytona Beach?) and “President Abbison Lattch, the great emancipator.”

Additionally, the power of the miracle prayer cloth itself—addressed in a mere two pages—is undermined when the author later attributes her husband’s healing to “all our prayers,” including those from the Church of God of Prophecy, Hindu temples, mosques, “every denomination.”

Despite such issues, the author’s devotion to God and family is admirable and will inspire others to see the good in every circumstance and trust in God.