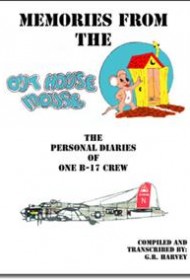 G.R. Harvey has done a valiant job transcribing the diaries of the combat crew of the World War II, B-17 plane known as Out House Mouse. Harvey’s father E.J. (Joe) Harvey was the crew’s pilot. His daily accounts from January to mid-June 1945 inspired his son to keep this historical record alive and to give readers an inside look at the daily life of a bomber crew.

To accomplish this, G.R. Harvey located all the crew members or their families and was given access to their diaries, which often served as friends, confidantes and a way to chase away the blues. From Lt. Paul Katz: “My name is up for tomorrow’s mission so I am going to bed early. As I said the other day, I am scared as hell again. I have really started praying every night since I got here. This is all for now, more tomorrow.”

Despite G.R. Harvey’s pains to be accurate, including clarifying notes, photographs, and newspaper clippings about the missions, the entries lack emotional impact because readers don’t have a broader picture of what’s going on at the time. The airmen report briefly on so many missions that it’s difficult to know which ones were important and which were routine flights. As a result, too many of the entries are just matter-of-fact and dull: “Breakfast at 545. Briefing at 645. Off to Sinsen, Germany. Short mission. No fighters. Flak lite but damned accurate. 7 hr. mission…” — Lt. Harvey”

Although it’s unlikely readers will tackle the book cover to cover, because of its shortcomings as a cohesive story, there’s still plenty to glean from paging through it. Take Lt. Harvey’s account – especially timely in light of London’s recent Diamond Jubilee – about meeting Princess Elizabeth and her mother in London: “They are quite nice and much, much better in appearance and manner than pictures make them seem.”

Despite the fact that Harvey’s book is more historical record than gripping saga, it deserves its place among the many important remembrances of World War II.