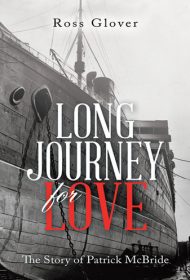 In Ross Glover’s Long Journey for Love, a young man and woman fall in love on a ship headed to Liverpool in 1921, only to find the romance thwarted over time.

Patrick McBride embarks upon a yearlong trip to Europe. Shipboard, he meets Col. Gadsden Formstone, who urges Patrick to dance with his young wife, Beth, secretly hoping to find a good match for her once he dies.

Beth was taken in at age 15 as a housekeeper by Formstone and his wife, Edna, after her parents were killed during the war. When Edna died soon after, Formstone, who himself is dying of stomach cancer, asked Beth to marry him. He had no intent of consummating the marriage, just simply to protect his fortune from greedy relatives.

Upon landing in Liverpool, Patrick and Beth agree to reconnect exactly a year later, but a twist of fate prevents that reunion. Both remember and miss their love connection, but feel all is lost. As the years pass, the story follows both characters in their daily lives—Beth becomes involved in a legal wrangle over the old man’s estate; Patrick, now a policeman, pursues dangerous detective work —until a chance encounter prompts Beth to look for Patrick once again.

On the plus side, the novel’s main characters are sympathetically drawn and likable, and the author vividly captures the era with references to the Spanish flu, Prohibition, bootlegging, and more. Glover also delivers skilled dialogue.

Beth’s and Patrick’s stories individually spark interest. However, the plot suffers because there is simply no communication between Patrick and Beth for 236 pages, during which time they oddly make no attempts to find each other. The ending stretches plausibility and is then completed in just 1½ pages in a rushed, seemingly foregone conclusion.

Despite the book’s attributes, the focus on the protagonists’ separate lives results in a watered-down plot, thin of palpable emotion, that is unlikely to speak to a broad readership.