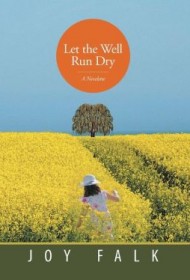 Joy Falk’s novella, Let the Well Run Dry, is both mystery and tragedy with a death that might possibly be murder detailed in the opening pages. Solving the crime is not Falk’s focus, however. In less than 100 pages, the story moves through numerous characters who seem, at first, unconnected to one another.

After describing the death of a widower in a small village who is found with a “fatal bullet wound to his right temple,” the author introduces Marianne, the daughter of Emily and Joseph. Marianne’s halcyon childhood devolves into a nightmare, and once she graduates high school, she leaves town.

The next chapter introduces Anna and Carl. Anna struggles to put herself through school, meets Carl and the two share a storybook romance, eventually marrying.

Finally, the author presents Holly who has a close relationship with her mother but has always felt distanced from her father.

As Falk examines these characters, the passage of time moves at racetrack speeds, robbing the story of the time it needs to fully develop. Readers are never allowed to experience the joys and heartaches of these characters because Falk offers just a few sentences to convey their feelings before shifting to the next activity or character.

It isn’t until later in the book that readers learn that these characters are linked. While the author seems intent on surprising readers with this development, there’s merely relief that at last the seemingly disparate lives are tied together.

Falk’s premise has potential, and certainly fate brings people together in the unlikeliest places for inexplicable reasons. Nonetheless, occasional references to past locales, slower transitions to express the passage of time, and stronger distinction among the characters would have resulted in a more engaging tale.