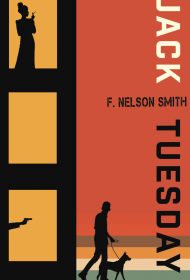 The first few pages of Jack Tuesday offer a glimpse into the protagonist’s past. Jack ran away from his mob family when he was 17. Twenty-one years later, after changing his name and following a stint in the Royal Canadian Dragoon, Jack lives in Edmonton far removed from familial ties.

It’s 1971, and Jack is an enigma among his colleagues on the Edmonton, Alberta, Canada, police force. They know little about him. Tenacious and intelligent, he’s a loner, with the exception of his relationship with his partner and best friend Brodie.

When Brodie is killed in an undercover raid gone bad and Jack’s gun is identified as the murder weapon, everyone is quick to pass judgment. Injured and left with no memory of the incident, Jack is the prime suspect.

In his quest to prove his innocence, Jack’s life is endangered, and additional murders ensue, always when Jack is near the scene. He’s trailed, shot at and severely beaten. Then, thanks to a neighbor, he learns about Tito, a Yugoslavian communist revolutionary—knowledge that eventually leads him to the murderers. (The idea is not far-fetched; Edmonton is home to many Eastern European refugees even now.) The intrigue is further enhanced by the possibility of romance and the theft of a classic Dutch painting. These aren’t simply distractions; they add depth and contribute to a fully engrossing plot.

The author crafts a credible mystery rich with twists and turns and just enough clues to keep readers riveted. Jack’s innocence is never in question, but there‘s no shortage of doubt regarding other characters, including some within the police department. The rapid pacing, a cast of vividly-portrayed characters and numerous elements of surprise make this story difficult to set aside.