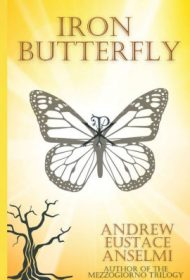 The first in Andrew Eustace Anselmi’s trilogy, Iron Butterfly recounts a dark chapter in an Italian American family’s history. It begins with Edward Bennett, a college student who visits his mother’s forgotten village in Sicily, starting the process of discovering why his mother refuses to speak of her childhood.

The novel is mostly set in the early 1980’s, with flashbacks to WWII.  Edward is a slightly arrogant young man preparing to spend a year at the London School of Economics, yet controlled by his mother, Marie, a deeply emotional woman who still holds Edward to a curfew. His father, Guy, a self-made success, has raised his children to achieve social status within the WASP elite that he, with his lower-class upbringing, could never have.

Curious about the few details he knows of his mother’s past, Edward, against her wishes, spends a day in her village while in Europe, meeting some of their relatives. A year later, back in the Bennett family home, a tense discussion prompts Marie to reveal what happened, as well as another secret she’s been keeping from her children.

Marie’s story is immediately engaging and full of dramatic action. The chapters recounting her memories also cleverly explain the repeated images of butterflies and opera music throughout the book.

The novel is divided into three parts and a Commentary section. The first part, detailing Edward and his time at his mother’s village, feels somewhat lengthy and slow-paced; it does, however, drop clues picked up by Marie’s flashbacks. Also, the male Bennetts can seem insensitive to Marie’s suffering, questioning, for instance, the torment of someone Marie claims was raped because it happened behind closed doors and she didn’t actually see it.

In addition, the Commentary is replete with psychological terms that many may find unfamiliar and feels unnecessary, as the novel offers room for readers to form their own interpretations.

Still, those looking for a powerful story and lovely imagery will enjoy Iron Butterfly.