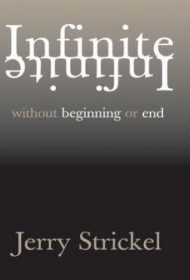 Allen Mead starts his truck and heads off on an unremarkable drive into the California desert, equipped simply enough with a cooler full of food and some basic supplies. A bright flash of light follows, and that’s where the long list of surreal elements in Jerry Strickel’s sci-fi story Infinite: Without Beginning or End kicks off.

Mead finds himself driving across an unfamiliar landscape; his food has shriveled up in the cooler, and he comes across immigrants making their way through the desert. He learns that he’s been displaced in time and space. Although he’s shifted six years into the future, the 63-year-old Mead has taken on the appearance of a 20-year-old.

Strickel uses this bizarre set-up as a diving board to plunge into a wide range of themes and narratives. The first part of the book focuses on Mead’s search for his wife more than six years after his disappearance. From there, the book veers in different directions – Mead finds his wife, who then subsequently disappears. The story eventually takes on a much more epic scope, with Mead facing the fallout from a meteor strike and the resulting global destruction. By the end, the story’s focus is on the human population’s trials after the strike and after Earth shifts on its axis.

While Strickel’s basic concept is intriguing, the book is weighed down by too many plot points. Between the ambitious menu of disappearances, supernatural science and global catastrophes, it’s hard to find an overarching theme or a constant thread. What’s more, Strickel’s text suffers from a lack of editing. The errors go past simple matters of punctuation or format: new characters appear without context, simple words are misspelled and some descriptions are disjointed. These errors are constant, making Strickel’s sweeping story hard to follow.

Due to these factors, the novel presents a challenging read and is likely to have difficulty finding a wide audience.