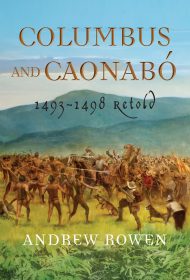 Columbus and Caonabó is an ambitious historical novel that recounts Christopher Columbus’ conquest of Caribbean islands and the native Taino people’s attemps to resist. Extensively researched, the novel refers to Columbus by both his Spanish name, Cristobal Colon, and the title the Taino use for him, Guamiquina, or “leader.”

Besides Cristobal, the novel features Bakako, a Taino captured by Cristobal’s men who now serves as their interpreter; Niana, daughter of a Taino leader sent to spy on Bakako, who falls in love with him; Caonabó, a Taino leader fighting against the Europeans; and Guacanagari, a Taino leader who makes an alliance with them. Fernando and Isabel, sovereigns of recently unified Spain, and Pope Alexander VI, appear frequently, negotiating the details of managing the overseas territory.

The novel captures the vast political intrigue, from Cristobal’s own men questioning his authority both in Spain and on the islands, to infighting among Taino leaders on how best to deal with Cristobal. Cristobal’s negotiations with the Taino are carefully depicted, each side distrustful of the other.

Action scenes abound, including battles between the Taino and European forces, as do lovingly written romantic scenes between Bakako and Niana. Throughout, the author depicts many details of Taino culture.

While the novel clearly sides with the Taino, devastated from war, rape, and disease, all of its characters are layered and complex. Isabel condemns enslaving the natives, especially if they can be converted to Christianity. Cristobal at first treats the Taino leniently, even after members ambush and kill several Europeans. Later, he acts more ruthlessly, making promises he cannot enforce. Even Bakako, renamed Diego by his captors, struggles with the compromises he makes to survive.

The novel contains a glossary of Taino words, a list of sources used, and historical images. Those more knowledgeable of the period will appreciate this documentation. Casual readers will simply enjoy the rich characters, thrilling plot, and exploration of a little-known culture.