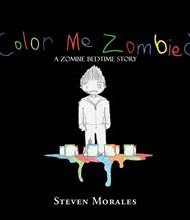 When a chemical spill turns everyone in the town of Eidolon into a zombie, it also sucks up all colors. In this children’s picture book, author Steven Morales writes about how a bold boy saves his hometown from the monotony of this colorless world.

Since the accident, young Caleb has lived with his family and beloved dog in a landscape of white, black and grey. The Eidolon townsfolk have grown afraid of color – so much so that the mayor has it officially banned. “Why ban colors you ask?” writes Morales. “To make sure no one was creative ever again.”

But one day, Caleb discovers old cans of colored paint in the garage and is instantly mesmerized. Over the protests of adults, who admonish him for bringing his discovery to school for Show and Tell, Caleb soon takes matters into his own hands and colors in the world! The grownups are livid, but the day is saved by Caleb’s friends, who stand up for their beliefs. Soon Caleb is a hero, not a renegade!

Morales’ story invites children to think about the power of taking risks, creativity and staying true to one’s self. His illustrations are professionally drawn and engaging (though the depictions of zombies with missing arms and torn flesh may disturb some children).

Unfortunately, the book is marred by several design choices. Throughout, the first letter of various words is rendered in color. When the color doesn’t pop against the background, the text becomes illegible. Text size distractingly changes from page to page, and the pages are extremely word-dense for the picture book format.

Additionally, the story’s resolution isn’t convincing. We’re told that because the children stand with Caleb, the whole town does an about-face. But this explanation feels hollow, the victory too easily won to be credible.

In sum, while the story’s message is admirable, overall the book requires some polishing before it is likely to attract an eager young readership.