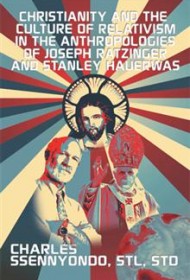 Christianity and the Culture of Relativism in the Anthropologies of Joseph Ratzinger and Stanley Hauerwas isn’t easy reading for a general audience. It is however, a fruitful, heady, astute, and expertly-executed book for scholars and academics that examines the work of two of the 21st century’s most relevant and outstanding theologians—one, the current pope, Benedict XVI; the other an outspoken Christian pacifist and fierce critic of liberal and fundamentalist Christianity—and their convictions against “the culture of relativism” in the modern age.

“Relativism can be described as a state of absoluteness of the individual,” writes author Father Charles Ssennyondo, “where the individual is source and summit of the truth, the good and the bad, and the right and the wrong.” In other words, relativism puts the desires of man before the desires of God which, as the book notes, can lead to dangerous and disastrous effects (two world wars and the genocides of the 20th century are fitting examples).

Written originally as a doctoral thesis with an imprimatur by Francis Cardinal George (an official declaration of ecclesiastical authority that the material is free of doctrinal and moral error), the book does an outstanding job of exploring the thinking of these men, comparing and contrasting their ideas surrounding contemporary culture, including salvation, prayer, the differences between Catholicism and Protestantism, the doctrine of original sin, and ethics—to name just a few. Moreover, in the last part of his book, Ssennyondo, born in Uganda, examines how Sub-Saharan African culture has contributed to Christianity and how belief in a Christian God can help the region’s clans and families.

There is little to criticize in this fine book (minor editing could streamline the argument and avoid repetition). Ssennyondo is a persuasive writer with a keen intellect, and though the book will mostly appeal to those interested in high-theology and anthropology, a well-motivated lay reader would find much to ponder here. A job very well-done.