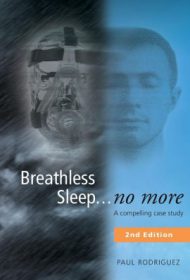 Sleep apnea, the temporary cessation of breathing during sleep, affects more than 100 million individuals worldwide, notes author Paul Rodriguez. In Breathless Sleep…no more, he shares his personal struggle with the condition and his discovery of the Buteyko Breathing Method, a technique that improved his apnea.

Rodriguez knows from experience how disturbed sleep can physically and mentally affect the body: For decades he fought weight gain, depression, poor sexual performance and low energy. “Paul – breathe!” his wife would cry during the night as he gasped for breath.

Indeed, sleep apnea has well-documented links to depression and poor daily functioning. Current understanding of this sleep disorder has improved, including the use of Continuous Positive Airway Pressure (CPAP) machines to increase air pressure in the throat and keep airways open while sleeping. However, this commonly-used therapy didn’t work for the author. He continued to seek solutions until he discovered the Buteyko Breathing Method, developed by a Ukrainian physician in the 1950s.

The author explains the method’s techniques, such as taping the mouth to avoid mouth breathing. He also describes surgery to loosen his tongue tie, a birth condition that tethers the tongue to the mouth’s floor and interferes with proper breathing. Detailing his six-week training course in the method, he writes, “I have rediscovered the benefits of quality sleep. I have clarity of mind, my body functions like a well-oiled machine instead of a broken down toy.”

The narrative is clear and generally easy to follow, although a second edition foreword that describes how, in the past, midwives would clip newborn’s tongue ties, would be more effective later in the book when readers learn more about the underlying causes of sleep apnea.

Regardless, the author pulls in readers as he capably describes his own journey to better sleep. This personal case study makes compelling reading for those suffering from sleep apnea, especially those who continue to search for answers on how to alleviate their condition.