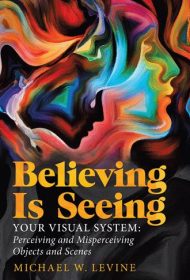 Although Michael W. Levine modestly states that “the ideas in” Believing Is Seeing, are “neither unique nor original,” and that his book merely presents his “personal take on how the visual system works,” his selection and discussion of ideas is fascinating.

What Levine claims, “in a real sense,” is that a person creates the world which he perceives. Vision is not just a camera-like snapshot of what’s out there, but a complex interpretation involving a “grand collaboration of cognition and memory with the more primitive inputs from the eyes.”

Levine begins by describing the physical components of the visual system (i.e. the cornea, lens, retina and iris) and what we know of how they work. For instance, he notes the “receptor cells… convert the energy of light into a neural signal,” and explores how disparate brain pathways may be dedicated to “specialized tasks.” Based on previous research, the dorsal pathway’s main purpose might be “to inform about the location of objects.” The ventral pathway might determine “the identity of the objects in a scene.”

Levine then describes a variety of factors that point to the creative nature of visual perception. Among the topics he covers are how the retina “pre-processes the images that it ships to the brain,” how the brain forms “perceptual hypotheses” from incoming stimuli, and how perception is influenced by context and expectation.

With Believing Is Seeing, Levine has written a highly approachable book about visual perception. His writing is clear and, except for one small section on sine waves, easy to understand. Readers should know that he doesn’t discuss color or (for the most part) motion in this book, choosing instead to concentrate on how we “recognize objects, scenes, and visual space.”

He also doesn’t discuss the epistemological implications for each person having their own, visually created world, and this is a pity, for Levine’s discussion would surely have been captivating.