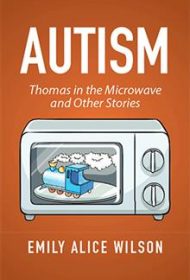 From the start of her book, author Emily Alice Wilson acknowledges that she’s not a professional, but the mother of a child with autism who is willing to candidly share her successes, “disasters” and ideas with other parents going through the same thing.

Like all good books, Wilson’s narrative takes us on a journey, from the first sign of Danny’s autism—as a baby, he screams uncontrollably when she takes him to meet her work colleagues—to her son’s coping mechanisms as a now-14-year-old. Danny hates crowds, being touched, and changes in his routine. He is obsessed with “lifts” (elevators) and trains, and refuses to participate in activities if the clocks on the wall display the wrong time. “Autism doesn’t care for social etiquette,” writes Wilson, noting that her son often startles onlookers by swearing when stressed.

Wilson also includes Danny’s positive traits: a propensity for math, punctuality, and a knack for “calendar calculating”—the ability to recall exact dates of past events. Now and then, she interjects humor, such as when Danny asks her to alert a play leader that he has autism spectrum disorder: “Tell him I have LSD, Mum.” And Wilson does an admirable job of contrasting Danny and his little brother Charlie.

Autism is, at its core, a mother’s memoir, with personal anecdotes interwoven with straightforward advice on issues such as echolalia (repeating phrases) and travel— all presented in textbook-like, meticulously numbered sections. As such, Autism can sometimes seem stiff and emotionless. This makes Wilson’s rare meltdowns even more jolting. “I slid down the slide into the ball pool,” she writes about taking the boys to a play center after a particularly bad day, “and in amongst the brightly coloured plastic balls, I burst into tears.”

Despite the unusual format, this book is a stark but gentle reminder that, above all, raising children takes patience, flexibility and unconditional love. It will be particularly appreciated by parents of children with special needs.