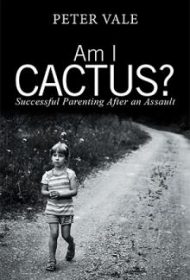 With Am I Cactus?, Peter Vale tackles the difficult subject of child rape and molestation.  According to Vale, his book is composed of an amalgam “of real-life examples…a compound of truth and fiction.”  The book’s primary purpose, Vale indicates, is to demonstrate how victims may be “empowered to move from victim status to survivor….”

The main characters are David, a retired “high school teacher,” and Erica, his little girl.  David’s wife, Fiona, is killed in a car accident when Erica is a baby, and David raises Erica on a farm in Australia.  When she’s six, Erica is abducted by a female teacher. The teacher rapes Erica with a hair brush, then strangles her.  Erica survives, however, and the book’s remainder deals mostly with Erica’s physical and mental recovery, and the teacher’s prosecution.

The author does a solid job showing how physically damaging such an attack on a minor can be. He also diligently supplies online references for the many topics he introduces, from the percentage of women who abuse children, to the prevalence of sexual abuse in boarding schools.  His recommendations for victim recovery primarily involve placing the child with someone she trusts, giving her examples of other survivors, and allowing her to discuss her trauma in her own time.  Readers looking for a how-to narrative will be disappointed in the paucity of suggestions.

More troubling, David tends to exhibit the red flags of a child abuser: He isolates Erica, refuses to get her psychiatric help, and rationalizes that molestation is less severe than some other crimes. He also dwells on the time when he, himself, was raped. The author’s language is often explicitly sexual. All of this muddies the book’s ability to fulfill its ostensible purpose.

While labeled as both truth and fiction, the prose reads like nonfiction, complete with footnotes. All readers should be warned that the contents are highly graphic and disturbing.