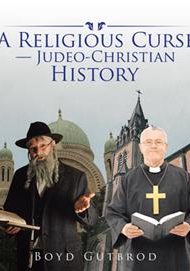 In A Religious Curse: Judeo-Christian History, Boyd Gutbrod seeks to explore the delicate, complex, unnerving, and volatile story of anti-Judaism in the New Testament and Christianity.

It’s a difficult fact, the author argues, that over the centuries certain interpretations of Biblical passages and traditions have had a horrific effect on Jewish lives worldwide. The author knows these views firsthand since he was raised a Catholic in the years preceding Vatican II and ascribed to numerous anti-Semitic ideas. Years later, Gutbrod undertook an historical investigation of the Bible and discovered that his views of Jews were incorrect, inhumane, and based on false interpretations and assumptions promulgated by theologians, historians, and religious leaders for almost two millennia.

Looking to expose these errors, Gutbrod offers historical insight on the development of Judaism and the rise of monotheism in what is now known as the Middle East; chronicles the development of the Hebrew and Christian Bibles; and explores the role of women in defining the scriptural canon. One of his most powerful chapters is on the ghettoization of the Jews by the Romans after Christianity became the empire’s chief religion in the 4th century.

Gutbrod is a learned author with a simple and effective prose style and displays a firm grasp of Judeo-Christian religious history. One problem that arises, however, is that Gutbrod often loses sight of his premise and instead gives us facts that seem tangential to his argument. For instance, his exploration of reincarnation in Chapter 1 feels like an unnecessary digression, as does his examination of Mary and the virgin birth later on.

Yet, these are more annoyances than structural problems. Overall, Gutbrod delivers interesting historical details aimed at showing “how human nature can twist and manipulate sacred literature in order to justify present concerns or needs.”

Note: Some readers may be offended that the author uses defamatory words such as “kike” to describe his opinion of Jews before he recognized his “past errors.”