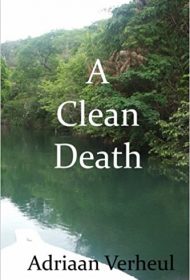 Adriaan Verheul’s gripping novel A Clean Death revolves around the murder of an international aid worker.

The story begins as American family man Oliver disembarks from a plane in the City by the Water in a country that, though unnamed, bears a strong resemblance to Uganda and the Democratic Republic of Congo. Oliver has arrived to set in order the affairs of his late father, Johan.

Johan was on assignment here for Gavels and Ploughshares International (GAPI), running a program to disarm a militia headed by Captain Christmas, a strongman with a messiah complex. However, Johan’s mission was cut short when an unknown assailant shot him to death. As Oliver deals with corrupt officials and his late father’s sometimes exasperating colleagues, he attempts to unravel the mystery of Johan’s death.

Meanwhile, Davey, a young American at loose ends, learns of GAPI’s disarmament project and believes it’s part of a conspiracy to institute a new world order. He eventually joins Christmas, who he naively reasons is standing against this potential tyranny and deserves support.

Verheul’s background in international affairs has taken him to conflict zones, and he has a clear and unsentimental eye for the personalities who congregate in such places. From Johan’s pompous boss Bruno; to self-righteous Vashti, who works for a rival aid organization; to V-6, Christmas’ conniving lieutenant –every character is uncompromisingly well-drawn. Verheul’s writing style is crisp and witty, and dry humor abounds, as when Oliver observes that Little Tromp Tower, the city’s swanky night spot, “was not exactly little; nor was there any tower in sight.”

Some may find the resolution disappointing, as an obvious character turns out to be the villain, despite a plethora of other tantalizing suspects. But it fits well with the novel’s overall realism.