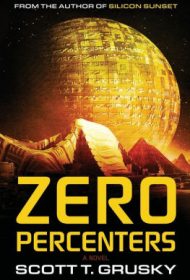 Scott T. Grusky’s science fiction novel, Zero Percenters, taps into modern readers’ fascination with themes like Artificial Intelligence (AI), the role of technology, and the potential for evildoers in the future.

The story’s protagonist is Anja Lapin, a young computer genius and daughter of mega-wealthy Chris Lapin, the world’s leading manufacturer of connected devices and AI apps. In his quest to help humans suffering from cancer, his team develops an AI algorithm that can digitally simulate the functioning of any human organ or tissue, hence allowing people to avoid the inherent limits of living, such as diseases and aging.

Unfortunately, terrorists strike, kill the group’s leaders, and steal the computer codes that would have made earth equitable and a delight for all. Of the team, only Anja, away on a trek, and Diego, a key team member called away by a personal crisis, survive.

Meanwhile, humans are increasingly opting to become AIs through the technology developed by Chris Lapin’s company. As Anja struggles to give all AIs, including those that began as human, the ability to go beyond the mind and tap their essential natures to achieve peace and bliss, a rival of Anja’s father plots to take control of this growing group of digitized people.

Like Arthur C. Clarke’s Childhood’s End or Robert Heinlein’s Stranger in a Strange Land, Zero Percenters is another articulate voice advocating for continuation of life because of its joys and the inexpressible experience of existence. The book is populated with very human characters, even the AI “concierges,” self-aware constructs charged with caring for their human counterparts.

Slowing the story are several overlong descriptive sections about the experience of being an AI and some unnecessary factual information: When discussing a flight over several towns, for instance, the author notes the elevation, geography, nearby mountains and temperature.

Despite this, techies will enjoy the possibilities Grusky presents, while others may appreciate contemplating the novel’s provocative themes about what, ultimately, makes one human.