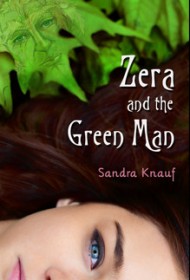 In Sandra Knauf’s debut novel for young adults, Zera and the Green Man, 15-year-old Zera discovers she has mystical powers to communicate with all things flora—and then some.

Orphaned after losing her parents in an accident, Zera settles in with her uncle Theodore, a nerdy, smart, biotech scientist who is kind-hearted but emotionally distant. Theodore works for a bio-engineering company, where he gets no credit for a genetically engineered fast food he developed. When he lands an interview for a promotion at a bio-tech firm in L.A., he guiltily deposits Zera at her adored grandmother Nonny’s doorstep to concentrate on his career.

Soon after Theodore is hired, readers learn that his new company is guarding ugly secrets. Meanwhile, Zera discovers that she can communicate with plants and other elements of nature. An old family friend leads her to a mountaintop and performs a ritual in which the skies open up and Zera is met by the Green Man. Standing 50-feet tall, he is made from a tangle of leafy vines that have twisted and formed into the shape of a man. The Green Man then reconfigures into a Green Woman who warns Zera about impending doom related to the bioengineering at Theodore’s new company.

The ensuing story includes a burgeoning romance, a kidnapping, underground guerillas and more, as Zera and her uncle work to expose the dark side of the company’s bioengineering experiments.

The story line about Zera’s ability to communicate with nature stretches on too long and drags the story down, especially when juxtaposed with the action-packed plotting of the rest of the story. Still, Knauf ‘s powers of description are marvelous, as is her ability to create original, funny characters and terrific, punchy dialogue. The story explores many of the issues and controversies surrounding genetic engineering. Though the book comes to a satisfying end, there’s a dangling thread that will leave readers hoping for a sequel.