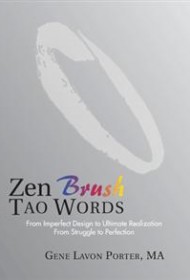 One of the classics of world literature, the Tao Te Ching by Lao Tzu, has, since the sixth century B.C., influenced and inspired millions. Its 81 spare, lyrical chapters offer a metaphorical roadmap to living in harmony with the universe.

If the Tao is a minimalist text to begin with, Porter reduces it even further. Sometimes the lines retain their epigrammatic flavor, as in “The way to the highest/ is through the valley”; other times they are mere fragments, as in “The cheerful parade” or “Devotion and loyalty.”

True to the original inspiration, Porter’s pages allow for varied readings. We may quickly read the whole book as one poem, each page loosely cohering to its neighbors. Or we may slow down, contemplating each page as a discrete whole. At times, the relationship between words and images appears ungrounded, as in “With trust / With ease,” whose illustration looks like a random scribble. Although all of the art is simple if not rudimentary, it occasionally achieves an enigmatic richness, as in the loosely organic piece accompanying “The whole is allowed to come of its own.”

The book’s hybrid nature is generally a positive, though the clash between its packaging and contents might lead some readers astray. The back cover and preface list historical figures (with several names misspelled) who struggled before achieving success, noting that the author has done the same here. Two subtitles (From Imperfect Design to Ultimate Realization; From Struggle to Perfection), add to the impression that this is a self-help volume, rather than a creative work of poetry and art, and could mislead readers.