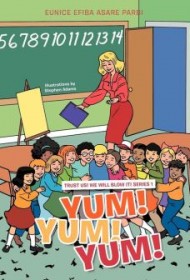 Author Eunice Efiba Asare Parbi seeks to emphasize the innate inocence and truthfulness of children in her picture book Yum!Yum!Yum!, the first in a promised series bearing the amusing subtitle Trust Us! We Will Blow It!

The “truthful” children in the story don’t come across quite as sympathetically as intended, as they happily accept their classmate Adam’s offer to share his candy with them and promise not to tell the teacher (“Not on our lives!), only to turn on him instantly the moment their teacher returns. The lesson being taught is ostensibly that being truthful is good, but it’s difficult to empathize with anyone except Adam, whose classmates have no qualms about ignoring their promises, then lecturing Adam about being truthful. The unintentional lesson being, perhaps, that “friends can be fickle.”

The book is unintentionally humorous at times, as Parbi’s characters, who look to be no older than 10 years old, often sound like simplified versions of adults. Ben, commenting on his delicious chocolate, is answered by his classmate Cara, who cries, “Where’ve you been all this time, sweet little thing?” Another classmate tries the chocolate and remarks, “Best delight, where are they from?”

The illustrations are clear and colorful, but also rather static; the point of view and background is the same in nearly every illustration. The children’s movements are clear against this unchanging backdrop, but it feels a bit like a flipbook that needs its pages turned quickly to get any real sense of motion.

The confusing moral and dialogue issues keep Yum!Yum!Yum! from succeeding. Some children might still enjoy it, but Parbi would be well served to do some fine-tuning before the next Trust Us! We Will Blow It! book sees publication.