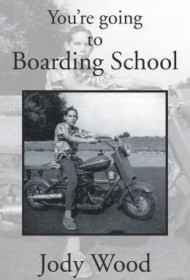 In You’re going to Boarding School, Jody Wood shares slices of his life: first on the family’s cotton farm in California, then at a boarding school in Arkansas as he grows to maturity during the era of President John F. Kennedy’s assassination and the Vietnam War.

The book consists of a series of short essays. Typical anecdotes include moments when he wonders if he’ll get to kiss the girl, when he makes decisions about smoking or drinking, and when he engages in boyish pranks — some that he gets away with; others, not so much. Wood’s experiences reflect some of the stereotypical strictness of boarding school, and corporeal punishment is certainly a threat, if only rarely a reality, in his memoirs.

What made his experiences different from the mainstream of boarding school is that it was a Seventh-Day Adventist school, where vegetarian meals were served, listening to preaching was a normal part of school, and mission trips, such as one Wood took to Mexico, were included in the curriculum.

Wood graduated during the Summer of Love (1967) and needed to see it for himself. At Haight-Ashbury in San Francisco, he saw “thousands of people everywhere wearing exotic, weird, and colorful clothing. It looked like a big circus…” The book ends with a description of his participation in a 2012 documentary about life in boarding school.

Two elements might have improved the narrative: more information about how his life as a Seventh-Day Adventist differed from the more mainstream life around him, and some context in the introduction that allows readers to see how boarding school served as a core element of his life.

Nonetheless, this is a pleasant look back, written in an engaging style. It will appeal to readers who want to recall what it meant to be a child and teenager in the 1960s, as well as those interested in what went on behind the scenes at boarding school.