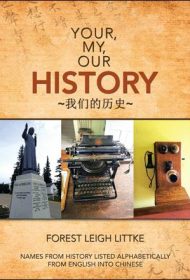 Forest Leigh Littke’s Your, My, Our History aims to combine history and Chinese language learning in one book.

Littke’s introduction, written in English without Mandarin translation, offers biblical and historical context to the origin of language in general and the Chinese language, in particular. The author also discusses some of his own experiences with China and its language.

He follows this with 444 pages of brief profiles of seemingly random figures throughout Western civilization—from Marie Curie and General George Custer to Jan Miner, the actress who played Madge in Palmolive dishwashing detergent TV commercials. The information offered is minimal (e.g., the William Blake entry says merely: “British poet and printmaker of the romantic period”), with Chinese translations below each profile.

The next section—a scant 28 pages—highlights notable figures in Chinese history (with no Chinese translation), along with space to practice writing Chinese characters.

The book concludes with pictures of currencies, quotes in both English and Chinese, and practice space for writing names of famous people.

While clearly well-intended, this book has significant flaws. The Chinese is typically a clumsy translation of the English. For example, in the Blake entry, a homophone of the character for “poet”(诗人”) is used instead of “poet,” and the Chinese actually reads “British-style, printing, romanticism.”

The section of Chinese historical figures offers a brief introduction to writing Chinese characters, but starts with uncommon, rather than simple, characters in famous people’s names and leaves readers guessing about the proper stroke order.

While mostly accurate, the profiles are sometimes misleading (The entry on Meir Zlotowitz claims he authored ArtScrolls, when in fact he’s founder of the ArtScroll publishing company), and a bibliography cites only seven sources for this 600+ page book; two are “wikipedia” and “Bing search engine.”

Finally, the target audience is unclear. There’s not enough teaching text to help beginning learners of Chinese and not enough solid history for those interested in this angle; English speakers could just as easily use Wikipedia, and Chinese speakers could use Baidu.

Overall, this book misses the mark and requires major rethinking and revisions to reach an audience.