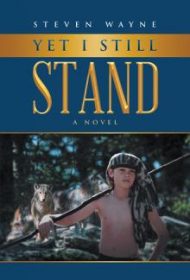 Author Steven Wayne offers a violent and disturbingly abhorrent portrait of a vigilante killer in this urban thriller that owes more to pulp fiction like Death Wish than it does to serial killer fiction.

We first meet Jonathan Anthony Russo, the mixed-race son of a gangster, as a kid in Queens, New York. Immediately, the author hypersexualizes Jonathan, taking pains to point out that he hit puberty at the age of eight and “…would hump anything and anybody, the wall, the floor, the edge of the bed.” This grotesque scene is punctuated by an ugly sexual encounter with a junkie.

Next, Jonathan’s father sends him to visit a grandmother in Montana, where he goes on a Native American vision quest, conveniently inherits land worth millions of dollars and is trained in firearms and bomb making by a local gun shop owner. Once back at home, a policeman tries to rape him, but he commands his dogs to tear the man asunder: his first of many murders.

As the years go on, the book falls into a familiar pattern. Jonathan has lots of sex with girls, dreams of becoming a football player at the University of Alabama, and murders a bunch of people, including the father who raped the valedictorian of his high school, another friend’s abusive father, Jonathan’s own father, and, in the pinnacle of his murder spree, hundreds of people in the bombing of a drug den. Throughout, Wayne takes pains to point out that Jonathan is a “wonderful young man.” The dichotomy between Jonathan’s portrayal and his deviant behavior is shocking.

The book gazes on its many perversions with an obvious sick thrill, taking glee both in horrific trespasses against women and Jonathan’s violent retribution. The character’s skills with weapons and outrageous wealth basically make him Bruce Wayne, but without the interesting psychological profile. Beyond casual sadists, it’s hard to imagine the readership for this unpleasant and troubling tale.