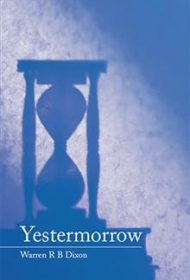 Warren R. B. Dixon’s novel Yestermorrow chronicles the life of literature professor Morgan Sizemore during 1973 as he copes with the aftermath of failed novels and failed marriages by engaging in fleeting romances. Integrating various literary techniques and traditions, the novel aims to convey Morgan’s revelations about disappointment and subsequent fulfillment as he arrives at middle age.

The novel opens with Morgan leaving the bed of one woman to see another, in an evidently typical day for the professor and apparent display of ‘70s-style free love. Later, he embarks on a sabbatical through Europe, accompanied by friend (and fellow sexual adventurer) Dr. Ragnar Jack. But where Morgan is portrayed as a live-in-the-moment artist and free spirit, Ragnar is sex-addicted, with callous disregard for his partners.

Yestermorrow echoes Kerouac in that it feels like a roman á clef travelogue in which Ragnar represents Dean Moriarty to Morgan’s Sal Paradise. Ragnar is the charismatic cad; Morgan is oblivious to his faults. Worse, Morgan begins to echo these faults at every turn, as when he refuses to aid his lover when she’s in mortal danger, or when he abandons his children to be raised by their mothers.

The narrative offers many well-crafted passages, such as this line describing Morgan set free in London: “His aloneness delighted him…He started each of those first three days in the hotel’s large stately dining room. He would leisurely drink their white coffee like an observing martian [sic].”

But while it attempts to convey the zeitgeist of a generation, the execution falls short. Morgan’s story never feels like a genuine search for meaning, nor does it display the self-awareness that would expose generational nihilism, as with books like Less Than Zero. Instead, it portrays men seeking superficial satisfaction, who carelessly abuse those who offer it.

As a result, readers will find little to like (or learn from) Morgan. Alas, the fulfillment constantly eluding the protagonist in Yestermorrow is likely to elude readers as well.