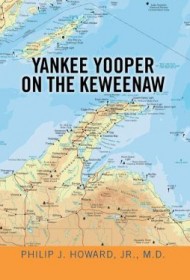 As a child, Philip J. Howard made a three-dimensional relief map of his home state and, in the process, developed a lifelong fascination with the Great Lakes and their underpinnings. Years later, he had the opportunity to return to his native state and satisfy his intellectual curiosity. In Yankee Yooper on the Keweenaw, Howard writes about his nine-week job in Michigan’s Upper Peninsula and the joy of immersing himself in the “Yooper” culture.

His book begins as Howard, a recently retired urologist, travels from Massachusetts to Hancock, Michigan, to take a temporary job as a urologist at Portage Regional Medical Center. His wife drives out with him to set up housekeeping in a rented cabin, then flies home, leaving him to his own devices.

In diary-style entries, Howard uses a warm, folksy tone to describe the patients who stream into his clinic with kidney stones, bladder cancer, and other problems, as well as to describe his everyday life. Sometimes, this involves jarring transitions; in one chapter, he toggles from cancer of the penis to a nice German dinner, without allowing readers time to shift gears. But as the story gains momentum, this becomes forgivable because it feels like an honest reflection of his dual lives as a man and a caregiver.

It’s not as easy to forgive Howard for changing his focus midway through the book. The engrossing memoir slams to a halt after Howard has spent six weeks on the job, and the diary-style entries are replaced by several academic chapters about the history of the region. The doctor is left floating in Hancock, without ever returning home or reflecting on the lessons learned from his odyssey, leaving readers who have grown fond of him during his adventure with the Yoopers hanging.

Although the personal story has great promise, the book ultimately disappoints. As is, it is likely to be best received by historians and those with ties to Michigan’s rural peninsula.