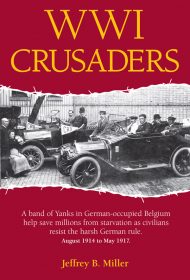 In WWI Crusaders, Jeffrey B. Miller provides an exhaustive and absorbing portrait of a mission to prevent the starvation of the Belgium civilian population during the first four years of World War I.

Miller chronicles the overarching efforts of Herbert Hoover, leading the American organization Committee for Relief in Belgium (CRB), and its Belgium counterpart Comité National (CN), to bring food and other forms of relief to millions of Belgians and Northern French ensnared behind German lines. Miller illuminates the intriguing political ramifications of these efforts through their tenuous collaboration. A particularly fascinating portion of the history chronicles antagonism between Hoover and the leader of CN, Émile Francqui, which could have severely undermined the international relief effort in the critical years 1916-1917. This information relies on previously unpublished reports and is a testament to the impressive level of Miller’s scholarship (as are the extensive Notes and index at book’s end).

Miller also captures the individual efforts of CRB delegates, generally “young, idealistic university students” who operated in the occupied territories and facilitated the day-to-day operations of the relief effort. The poignant stories of these delegates (sourced from a trove of primary material, including diaries and letters) illuminate the unique human achievements behind the statistical enormousness of the operation. Miller himself is the grandchild of Milton M. Brown, a delegate who is featured prominently in the history.

WWI Crusaders also details the ongoing Belgian struggle to publish the underground newspaper La Libre Belgique. The publication’s history, and its related intrigues are thrilling. Interspersed throughout the narrative of the CRB’s operations, the struggle of La Libre Belgique drives the larger history of the relief effort forward, serving as a microcosm of the entire endeavor

The volume of statistical data in WWI Crusaders can be overwhelming and could be tempered by a heavier editorial hand; however, for any student of WWI history, Miller has created an invaluable addition to the scholarship.