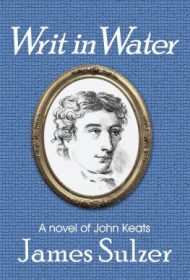 James Sulzer’s Writ in Water is a poetic, surreal narrative that inhabits the interstitial space between fiction and biography. It follows John Keats—the English Romantic poet—as he struggles with his career while falling in love and coping with his brother’s death.

The year is 1821 and Keats has died from tuberculosis at only 25. However, his existence isn’t over. Caught in a limbo-like place above Rome, the poet looks at the most important events of his short life. Accompanying him is a spirit in the body of a bird who serves as co-narrator but is unable to speak to Keats despite knowing English. While floating over Rome, Keats faces his critics, remembers his brother Tom and sister Fanny, recalls his love for Fanny Brawne and his journey away from medicine and into poetry.

The novel reimagines Keats at the moment of his death and puts his life and literary efforts into context. Despite the critics and naysayers, the narrative shows a man who knew he was born to write and communicated his dream to everyone: “That I shall be among the English poets after my death.”

Sulzer skillfully juggles his two narrators. Keats speaks in his own voice, which illuminates his personality and coping mechanisms. The spirit/bird that accompanies him offers judgment and allows readers to see things from an outsider’s perspective. Also, the spirit/bird comments not only on Keats’s actions but on language, the human condition, and other things: “Words are like the taunts of a blue jay, but more cutting and subtle. By sharpening the edges of their words, the earthbound have refined the delivery of pain.”

A narrative about Keats told in his voice should have a distinctive flair, and Sulzer doesn’t disappoint. Touching and engaging, this entertaining mix of fiction and biography brings Keats vividly to life.