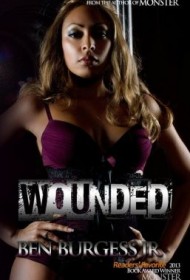 The survivor of an abused childhood prowls the urban sexual jungle and yearns for more in Ben Burgess’s new novel, which follows his 2013 debut, Monster.

When readers first meet Samantha Miller, she’s lolling in bed in her Co-Op City apartment while the woman she just seduced scrambles into her clothes. Sam likes to have one-night stands (explicitly described), then dump her conquests. Horrific nightmares about her past, when she was pimped out to men from the age of ten by her drug-addicted mother, make it clear how damaged Sam is, but she’s also callous and exploitive.

Sasha, the new cocktail waitress at the Bronx bar where Sam is the headline stripper, seems at first like more prey. It takes a long time—and a lot of sex for Sam with other people —before the two women admit their feelings.

As the characters’ profane dialogue regrettably turns into psychotherapeutic boilerplate (“I wanted to heal and let go of the pain I had in my heart”), readers may worry that this streetwise saga is going soft. Not at all: Sasha’s coming out to her religious family is a disaster and provokes a crisis in her relationship with Sam that ends tragically.

Burgess isn’t the most elegant prose stylist; stock phrases such as “shapely hips” and “the crowd went wild” litter the text. He seems to be in too big a hurry to look for a more imaginative way to convey his message. Where it counts, though, he never settles for the quick solution. He knows there are no easy epiphanies in real life, and he lets his initially unlikeable protagonist grow up and change without losing her honesty and drive.

Burgess states in an epilogue that he writes books to “move people emotionally and help to change the world for the better.” Awkwardly written though it sometimes is, his heartfelt, emotionally powerful tale might just do that.