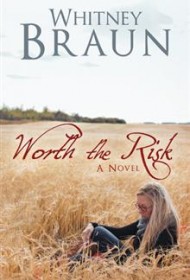 In this Christian-based romance novel, the protagonist must decide if she can forgive herself for her past actions and re-connect with her faith, her family and her first love.

Anna Rempel, a senior manager at a major Toronto accounting firm, is from the small, tight-knit community of Sethburn, Saskatchewan. Some five years earlier, Anna fled the town to hide her secret: that she had become pregnant on prom night in a moment of recklessness with Drake Hemming, her long-time boyfriend and best friend. Although she suffered a miscarriage shortly after leaving, she still guards her secret, shame and grief from her family and Drake. But Anna can’t avoid the town forever, and when her older sister asks for her help in starting a dating service in Sethburn, Anna returns home to lend a hand.

The story should hold much appeal for readers in early adulthood who are seeking answers to their own crisis of faith. Anna is lonely in her new life in Toronto, but she knows that if she had revealed her pregnancy, she would have sealed her future — marriage to Drake and life as a farmer’s wife — before she had a chance to examine her own dreams.  “Anna was confident her teenager self had made the right decision to leave, regardless of the miscarriage. She had gained freedom from what could have been a confining lifestyle. The farming, the church, the expectations, all of it.”

Braun’s book nicely re-creates small-town life, right down to Anna’s skepticism about the need for a dating service there. The book has more than a few copyediting and grammatical errors, but that shouldn’t deter those looking for inspiration. As Anna and Drake grapple with their youthful indiscretion, they stumble onto the passage from Proverbs 16:9: “The mind of man plans his way, but the Lord directs his steps.”

For those involved in their own struggles, Anna and Drake’s story will likely resonate in a positive way.