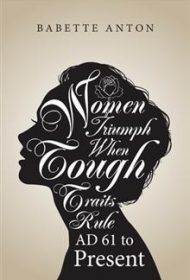 In her slim book, Babette Anton offers almost two-dozen short profiles of outstanding women from around the world and throughout history, with the aim of inspiring young females.

Anton begins her review of notable women with the rather random starting point of AD 61, highlighting early English Queen Boudicca, who led a major uprising against the occupying Roman army. Clearly Boudicca can be considered something of a role model for her sex, although the author delivers an odd message by mentioning three times in five pages that the warrior queen did not cry. “Women must never melt with tears,” she writes later in the book.

Such questionable advice and mixed messages abound. Elizabeth I is praised for dressing in all her finery, yet former Israeli prime minister Golda Meir is commended for not following “trendy styles or unnecessary socializing.” And while British prime minister Margaret Thatcher is lauded for her close working relationship with President Reagan, female readers are generally advised not to depend on – or even trust — any man.

Anton also puts a benign spin on behaviour that might otherwise be considered marginal, such as Elizabeth I “discerningly” having her half-sister executed and “shrewdly” choosing not to share her popularity or power.

The back cover notes that the book is aimed at “teen girls,” with the goal of helping them “set their sights on developing leadership.” While, it’s hard to argue with the book’s strong emphasis on the importance of education, idealism, hard work, tenacity and courage, the narrative’s mixed and sometimes inappropriate messages may serve to confound readers rather than rally them to great heights.