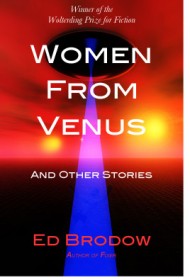 In Women From Venus, Ed Brodow serves up a collection of four wry tales, featuring characters that find themselves in unfortunate predicaments with outcomes that are life changing.

In the title story, a novella, psychotherapist Robert Elgar attempts to discredit a Harvard Medical School psychiatrist who published a bestseller purported to be an in-depth study of aliens and alien abductions, and who continues to capitalize on people’s beliefs. But the story takes a turn when, just as his adversary arranges to have Elgar tailed, Elgar falls for a woman who eventually reveals that she’s been abducted not just once, but several times.

“The Man Who Could Not Make Up His Mind” pits a wealthy underdog — “a type-B personality stuck in a type-A lifestyle” – against a gold digger who coerces him into marriage. “Clifford’s life with Shirley can be divided into three stages,” writes Brodow. “The first stage was their courtship.., the second was after marriage… and the last stage was the one in which Shirley dropped all pretense and let the cat out of the bag and all over the carpet.” Fast-paced, this is the strongest of Brodow’s stories, one that leaves the reader cheering for the protagonist.

The sole dark story is “The Stamp,” a tale of a former Marine in search of his sister’s killer. He finds the man and learns something surprising about himself in the process.

Each of the stories here has merit. They are interesting and move quickly. But some of the characters read like flat stereotypes, and in at least one instance, Brodow rushes the ending, telling the outcome, rather than letting it develop. Likewise, in “The Stamp,” he gives into a clichÃ©d male fantasy ending. Despite such weaknesses, these stories are generally good reads, told with a tongue-in-cheek sense of humor (when appropriate) and crafted with an appealing voice.