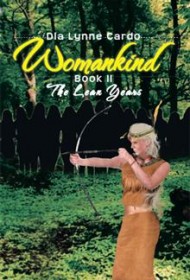 Dia Lynne Cardo’s Womankind Book II, The Lean Years, reads as a parable through a mythic telling of Apache culture and experience, centered on a handful of women who survive the decimation of their tribal group.

On its back cover, the book claims to answer the question “Do women need men for survival?” But in fact, the story answers a much more interesting question: How do those in power wield that power? Indeed, this story is about a handful of admirable women, and a few men, who make the difference when others huddle in fear or indifference.

The story opens with a fictitious scene where Geronimo and his men fling themselves over a bluff rather than surrender to U.S. soldiers. The Ancient One, the wise and eldest woman of the surviving Apache group, is also nearing her own death, but aims to hold on long enough to teach the women – now feeling the absence of the men — to hunt and fend for themselves. She also hides a history that binds her to a mystery in the tale and to a young woman in the surviving group who resists her wisdom.

While the story is clearly told in a mystical way, Cardo needs to hold more closely to historical fact when it comes to the Apaches — or at least explain her departure from it. In reality, Geronimo and his men surrendered and Geronimo lived to the age of 80. If Cardo intended this scene to be read on a mythic rather than factual level, it would have helped had she given stronger hints for this. The story would also be better served with a more appropriate title, such as The Ancient One.

Overall, however, Cardo delivers a creative tale of magical realism. Those who can look past the inaccurate history will find a generally absorbing story that examines an important question: How do people thrive after terrible hardship and manage their power well?