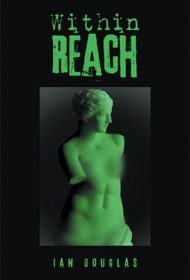 Within Reach begins as Simon arrives at a new posting in Christchurch, where he immediately butts heads with the comically ineffective Inspector Galligar. There, Simon encounters a puzzling new case: A severed hand and arm, from two different bodies, have been found in charity clothing donation bins.

After introducing this mystery, the novel flashes back to find Simon’s marriage collapsing when he refuses to bend the law for his wife’s brother. In the wake of this turmoil, Simon transfers to Queenstown, a popular tourist spot, where he begins a whirlwind romance with Melanie, a civilian assistant.

Simon’s adventures in this 300-plus-page flashback include apprehending a trio of thieves and transporting them to England, defusing multiple hostage situations, and going toe-to-toe with Melanie’s authoritarian father. The story eventually comes full circle, with Simon deftly solving the grisly crime that opened the novel.

Overall, Within Reach makes for an enjoyable reading experience. Simon’s colleagues are well-drawn and easy to like, reminiscent of the ensemble cast of Mark Billingham’s Thorne novels. Douglas writes smoothly and clearly delights in pillorying the novel’s antagonists, including acronym-spouting Galligar and Simon’s bullying prospective father-in-law.

On the other hand, readers may be frustrated to encounter such a major detour that has nothing to do with the initial mystery’s resolution. Restructuring the novel – perhaps alternating flashback and present-day chapters – could avoid this problem.

Additionally, some individual passages could be trimmed significantly. For instance, Melanie’s tarot reading with a psychic is too long for its relative insignificance to the plot, as is a detailed description of the Queenstown evidence room’s history.

Dedicated genre fans, particularly those in search of an antipodean setting, may appreciate Within Reach as it stands. A thorough edit, however, would greatly increase its appeal to its target audience.