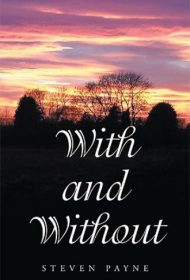 In this memoir, author Steven Payne recounts the life he shared with Rhona Goldstone, his partner of 21 years.

The pair meet in a Yahoo chat room in 1997. Steven is 25 and lives with his parents, supporting himself on “benefits” because of mental health issues that are at times “severe” and “incapacitating.” Rhona is a 46-year-old widow, old enough, he notes, to be his mother. But the pair are not concerned about their age differences, and when Rhona travels to meet Steven, the attraction and connection is immediate.

Not long after, the author visits Rhona for a New Year’s Eve party 80 miles away and moves in with her. She calls him “Weeven” or Weev;” he calls her “dumpling” and “sweet tart.” Together, they are “Team Wowo.”

The pair travel, cook, attend concerts and weather a pregnancy scare. In time, they buy the house that will be home for one day shy of 18 years. Then, 13 years into the relationship, the couple hits a bump in the road, and Rhona throws Steven out of the house for infidelity. Months later, she texts him “I’m not well,” spurring eventual reconciliation. It’s the beginning of an illness that will ultimately claim Rhona’s life.

Payne writes, with candor and without being overly dramatic, of his love for Rhona — gone less than a year as he writes—and the pain of her loss. His new status as a widower at only 46 adds an undercurrent of vulnerability as he relives who they were as a couple, while puzzling out who he is now. Although some of the information is redundant as he reveals their early days, then later recalls those days, it’s a minor matter that doesn’t detract from the story.

Intelligently written and detailed, with information on everything from mental health to philosophy, religion and grief, With and Without will appeal to a wide range of readers, especially those who have suffered great loss.