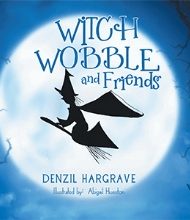 This children’s book features the story of a witch, her wizard friend and a cast of supporting characters.

Despite a picture book format, the book lacks illustrations and is divided into chapters. Its plot is meandering and leans heavily on a large troupe of characters.

Witch Wobble is one of 49 witches in England. She resides in a quaint cottage with many chatty companions, including a talking broom, sleepy cat, and mouse and frog who love engaging in political debates. The book also features a wizard named Wizzy who may have a crush on Witch Wobble, although those feelings go mostly unexplored in the book.

The story begins one morning as Witch Wobble prepares tomato soup for a lunchtime visit from Wizzy. Meanwhile, the mouse and frog debate education policy and the house’s other residents go about their business. Wobble and Wizzy have a nice visit that lasts most of the day; then Wobble goes to bed. Her birthday is the next day—October 31—and the town is hosting a Halloween ball.

The following day, readers meet Witch Wobble’s four brothers and follow her to the ball, where she spends more time with Wizzy and where much attention is paid to the musical performances. The story concludes with Witch Wobble returning home to bed.

More vignette than story, Witch Wobble and Friends captures a few days in the life of a young witch. It painstakingly records her spells and quirks, including the huge assortment of ingredients she uses to make tomato soup. Although some of these details are charming and certainly contribute to the setting, they never drive toward a larger and more compelling story. The many characters become indistinct as their  names and personalities quickly begin to blur.

With no mystery or objective to give the characters direction and no illustrations to bring Witch Wobble’s world fully to life, this children’s book will struggle to capture the attention of young readers.