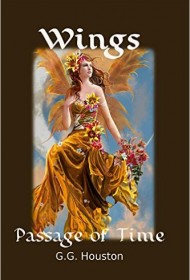 We meet three types of faeries in the story: Unseens (able to disappear), Lights (able to emit bright light), and Trolls (bad-tempered faeries with no special abilities). Although Lights and Trolls reside in the nearby forest, Unseens live hidden inside a large house with humans.

In Part One, brother and sister Unseens, Glemce and Faze, venture into the forest and meet forest Lights, and then live among them to bridge the gap between the two types of faeries. Dirty, bug-eating Trolls, however, present a constant threat to the other tiny winged forest creatures. (Depictions of Trolls range from humorous to horrific, making them perpetual scene stealers.)

Part Two takes place many years later and introduces the next generation of faeries. Sage, the new faery queen, unites all magical forest creatures – making friends of Unseens, Lights, and Trolls. Part Three – an abrupt change in focus rather than time – emphasizes human interactions with faeries and with each other. Able to shape-shift into human and animal forms, Sage befriends Thomas, the man who owns the house in which Glemce, Faze, and other Unseens were raised, along with the land Lights and Trolls call home. Together, humans and faeries fight an evil witch with murderous intentions.

The author has created an entire world of faeries that should delight young adult readers intrigued by the possibility of magical creatures living among us. The world is richly imagined, including a thorough depiction of rules, customs, and mythology. The story remains engaging throughout, although sometimes writing problems interrupt the flow; these include occasional awkward sentence structure (“Several heavy with thick claws fingers latched into her leg fur”) and copyediting problems (“He’d only been able fluttered around inches at a time”).

Such missteps, however, are generally easy to overlook. Overall, readers will find an enjoyable fantasy story, sure to please.