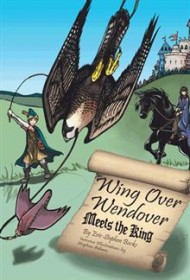 In Eric Stephen Bocks’s third book in his middle-grade Wing Over Wendover series, 16-year-old protagonist and master falconer Timmy discovers himself in a time travel adventure.

Soon after showing off his peregrine falcon Wendover at a Renaissance faire, Timmy trips on a rock and is knocked unconscious. When he comes to, he’s shocked to discover himself somehow transported to medieval England. There, he learns he was adopted by Cornelius, a great falconer, and that he and Cornelius are employed by Richard, the King of England, to care for and train his stock of royal falcons. To his great distress, Timmy is told that the king intends to give Wendover, Timmy’s favorite falcon, as a gift to Phillip, the French King, to secure peace.

Sarah, a lovely maiden whom Timmy loves, quickly enters the story, and they share their first kiss. Next, Timmy learns of an important event; for the next few days, the two kings, their entourages and falcons will compete in a hunting competition. The story quickly picks up with several equally intriguing subplots: One of Phillip’s henchmen plans to kill Wendover; Timmy spies Sarah in an embrace with another man; and a mysterious crimson-caped man plots to kill Richard.

Bocks has created a rich cast of characters and does a splendid job of interweaving the intricate plots, which mesh together in a final, heart-pounding, cinematic-like end. However, the story has one important missing element: background into Timmy and Sarah’s relationship. Although their romance is integral to the plot, as it stands, it lacks emotional depth. And while the cover illustration is fairly well-rendered, the book’s spare black and white illustrations are less successful. Finally, not only can Wendover and Timmy converse, but other animals hold conversations as well; more sophisticated child readers may shun the talking animals device.

Overall, however, this is a lively and original action-packed romp that should entertain an enthusiastic middle-grade audience.